From Seville to Granada 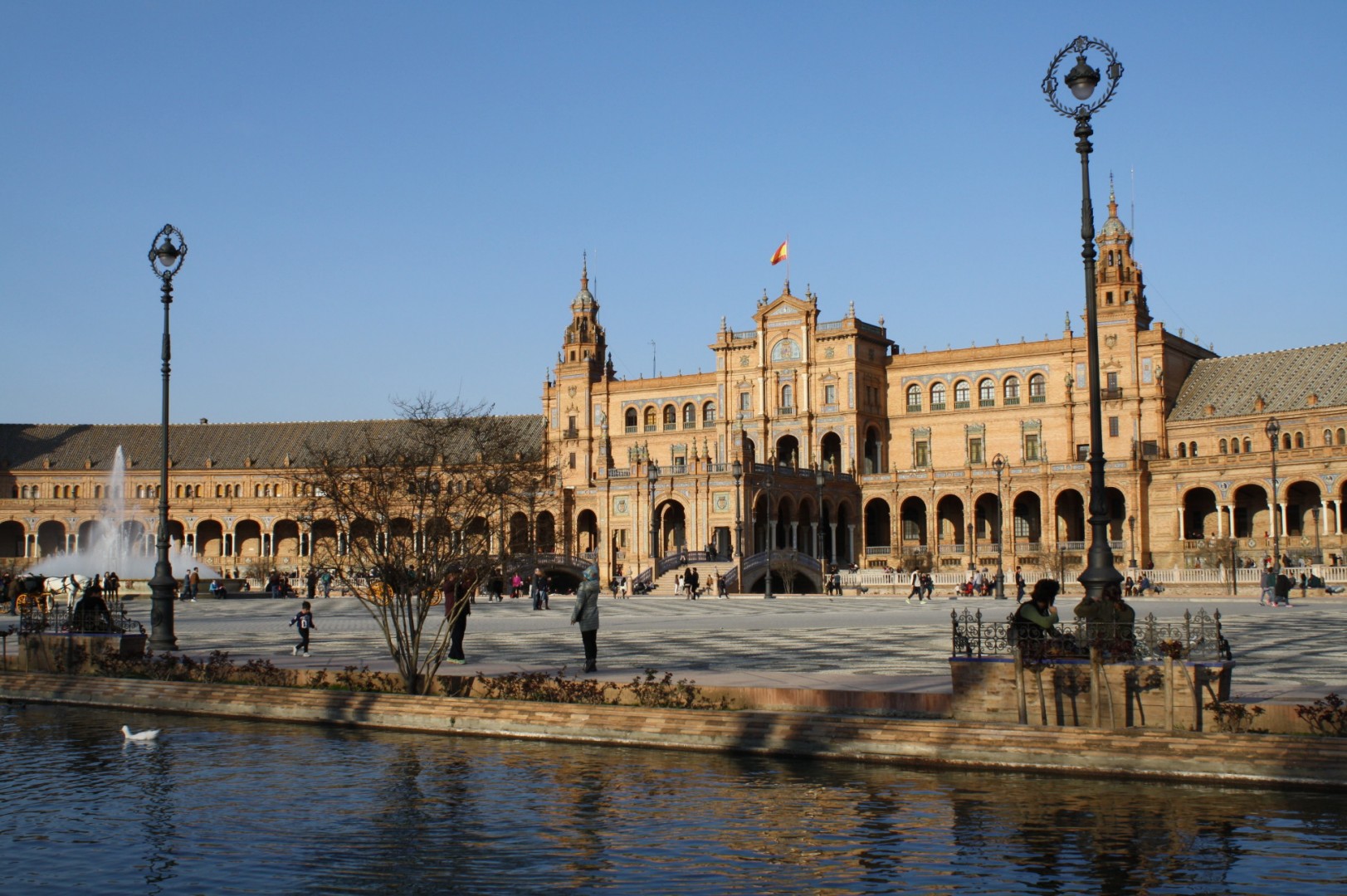 Washington Irving the great American writer and exponent of American gothic and romantic literature spent a period of time staying in the Alhambra of Granada. Published in 1832 The Tales of the Alhambra recounts many of colorful tales and histories asociated with the famous Alhambra which Washington Irving collected during his stay.
The same book also importantly recounts the journey he made by horse between Sevilla and Granada in May of 1829.
The Washington Irving Rute cuts an axis through the heart of Andalucia from the flat, open and rich lands of Sevilla and winding its way to the craggy mountainous terrains of the east famous for its castles and bandoleros.
We follow in his footsteps as we visit proud monumental towns rich in history and pass through quiet villages and sleepy hamlets still today tucked away in the back of beyond.
In the seven stages you will come to find a greater understanding of our region in all of it´s variety and you also find time to enjoy the moment and feel the adventure which Washington Irving felt one hundred and fifty years ago.
Days/nights: 4 days / 3 nights.

Assistance: Our base in Seville allows us to have daily news, full control of each situation and guarantee a direct assistance.

Luggage: Transport to the hotel.

Meeting: At Tuscany Ride bike in Seville City centre on the first day.
Day 1: Arrival in Sevilla and check in at hotel
To begin enjoying the ambience of Sevilla we recommend you enjoy a tapas in any of the typical bar in the Barrio Santa Cruz and after a meal you can take a walk to the Metropol Parasol to enjoy the splendid nocturnal views of the city. Afterwords the meeting at our shop for a briefing and to receive your maps, GPS, bike and bike-fit.

Day 2: Visit the city of Sevilla
There are many things to do and see this being the capital city of Andalucía. The soul of the region is the andalussian way of life, the tapas, the wine, the beer, the flamenco and the ¨fiesta¨. Situated on the banks of the River Guadalquivir Sevilla has numerous historic buildings such as the Casa de Pilatos, the Torre de Oro, the Ayuntamiento, the Archivo de Indias and the Art Museum. We highly recommend you visit the Alcazar and the cathedral. After the briefing you can ask us the best way to see the many attractions.

Day 3: Sevilla/Carmona - distance: 54km, accumulated climb: 593m
We leave Sevilla for the monumental town of Carmona. The first stage is planned to follow public greenways, paths and the old railway line to Carmona so as pass a pleasant day out of the way of traffic. A little more bumpy but well worth the peace and quiete ! Following the River Guadaira the first port of call is Alcalá de Guadaira. Following on your journey you will pass the remains of the Posada de Gandul ( the Staging Inn of Gandul ) where Washington Irving himself stayed. Following the old railway line from Gandul to Carmona you will immersed in the open country of the part of the province of Sevilla and by finishing the ride by entering Carmona through the Puerta de Sevilla (the city Gate of Sevilla).

Day 4: Carmona/Écija - distance:68km, accumulated climb: 433m
Pathways are changed for asphalt and you step up a gear or two. We leave Carmona again through the Puerta de Sevilla and head south east towards Marchena. Another town made rich by the fertile countryside in which it sits it boasts aquitectural interests from Roman to Renaissance times. Following your course north east you finish your stage in Écija and here you rest the night amongst the towns many splendors.

Day 5: Écija/Osuna - distance: 34km, accumulated climb: 318m
A short stage due south, maybe a little faster and you can leave Écija later or arrive in Osuna earlier. Either way this stage is relaxing. Osuna is another monumental town which founded it´s own university in 1548 and which has so many buildings of architectural interest, it is one of the best preserved old towns in Andalucía

Day 6: Osuna/Antequera - distance: 77km, accumulated climb: 508m
This is the most ambitious stage of the route but is is rewarded with a rest day afterwards. The gentle climbs signal that you are now leaving the fertile river valley, the surroundings becoming a little higher and rockier. Maybe there are bandoleros in those hills ? You pass through Estepa, a town which sits up above the surrounding areas which it used to observe. There is now no doubt that the terrain has changed. a longer and more winding stage which passes for the Laguna de Fuente de Piedra and finishing in the foothills of El Torcal.

Day 7: Resting in Antequera
You rest in Antequera a town on the node point between Malaga and Cordoba, Sevilla and Granada. A frontier town which boasts remains of all cultures which have settled there from the Dolomites onwards. After the longer ride and the change in terrain you now are midpoint on your journey and ready to enter the kingdom of Granada.
To prepare ourselves for the last efforts we recommend a relaxed day visiting Antequera, a historic city which is among beautiful in Andalucía. There are a variety of routes, however we recommend the Alcazaba árabe and the Basilica de Santa María, and you must visit the historic center with its churches, monasteries , hermitages, town houses and bronce age monuments.

Day 8:  Antequera/Loja - distance: 50km, accumulated climb 757m
Shorter stages as we now start gentle climbs. Todays stage is rewarded with a descent in to Loja. You pass through Archidona a hillside town in which Washington Irving recounts the tale of the poor blind man and the hidden treasure and you move forward to Rio Frío famous for its trout. The feeling is now completely distinct from the start of your journey as hills surround you and the roads wind. A well earned rest in Loja surrounded by sierras and history.

Day 9:  Loja/Alhama de Granada - distance: 31km, accumulated climb 695m
The shortest stage today as there is a longish climb to reach Alhama de Granada. At your maximum height you climb from 500 m above sea level to 1000 m, the town itself sits at 800 m, and that means a down hill to finish the day. Situated between Malaga and Granada the town was an important way point and was of local regional importance in Roman and Moorish times. A visit to the Baños Arabes (Arab Baths) is a must as much of the towns fame from Roman times onwards is based on its natural thermal waters.

Day 10:  Alhama de Granada/Granada - distance: 53km, accumulated climb 772m
A climb out of Alhama de Granada and a well deserved long descent into Granada itself. Granada nestles between the high sierras which surround on three sides and the flat valley which stretches west. The views which it affords from a far are sure to impress you as it did Washington Irving. On arrival you park up your bikes at the hotel, and take the time by foot to gently take in all that this wonderful city has to offer.

Day 11:  Visiting Granada
The centre of the city has many buildings of the Andalusi style, the Arab Baths and the Moorish neighborhood of the Albayzin, but the marvel of Granada is is most famous monument without doubt is the Alhambra, the Moorish fort and richly decorated palaces surrounded by vegetation. Next to the gardens of the Generalife and the Albayzin, the Alhambra has been declared Patrimonio de la Humanidad by UNESCO. Granada also has a renaissance cathedral which dates from the XVI th century around which there remains many signs of Moorish, Jewish past Catholic past of the city. Apart from the arqitectual gems which narrate a thousand years of history the gastronomy of Granada is rich and diverse and is a reason in itself to visit the city. You can enter a great many restaurants and bars where you can try delicious plates such as migas, el remojón, habas con jamón, tortilla Sacromonte y el gazpacho. The areas most famous for the tapear are the Albayzin, the Campo del Principe, the Realejo. the Plaza de Toros and the centre.

Day 12: End of journey
After having enjoying the morning in Granada you can return to Sevilla by train (about three hours) or leave directly from Granada (leaving your bikes in the hotel) or your may wish to extend your stay for some extra days in one of the many beautiful areas of Andalucía.
Price per person: € 1.250

Includes:
- 12 nights in double room with continental breakfast in 3/4 star hotel or farmhouse.
- GPS (with battery) and maps.
- Transportation of luggage to the hotel.
- Emergency number.