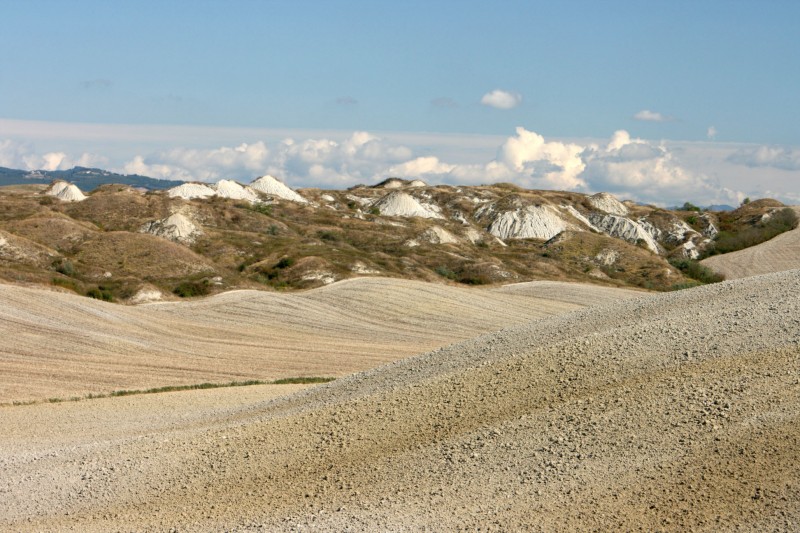 In the heart of Tuscany, in south-east of Siena, there is an area with a surreal landscape, unique in its kind: Crete Senesi. It's a series of bare hills on which stand out solitary farms, groups of big oaks and cypress trees; apparently nothing seems unusual while observing the typical countryside around Siena, as we can easily see in classic postcards. However, it's not so: what makes this area different from the rest of the territory, are the clay outcroppings that make the area similar to the typical lunar landscape with gray hills and white domes of salt. Here, it's really amazing to ride on dirt roads...until you reach the desert!! Yes, you read right, in the heart of Tuscany there is "Accona Desert"! That desert is also depicted in the famous cycle of frescoes of Good Government in the City Hall of Siena and it's enclosed by three beautiful medieval towns: Buonconvento, Asciano and Montalcino. The first village is protected by its old walls and was the theater of Henry VII of Luxembourg's murder, poisoned by a local priest. Asciano, according to legend, was built by order of Ascanio (son of Remo, founder of Rome, and brother of Senio, who gave his name to Siena) is a village probably born around a church of the Lombard period, contested between the bishops of Arezzo and Siena. Montalcino however, today is an oasis of peace and good wine, that we have already discussed in another article. To face these landscapes, we offer our gravel bikes, suitable to face dirt roads and unpaved funds.
This beautiful landscape is present in our bike tours and if you want to immerse yourself in Crete Senesi, now you just have to contact us to organize a trip with us!