Bagno Vignoni, a water square in the heart of Val d'Orcia 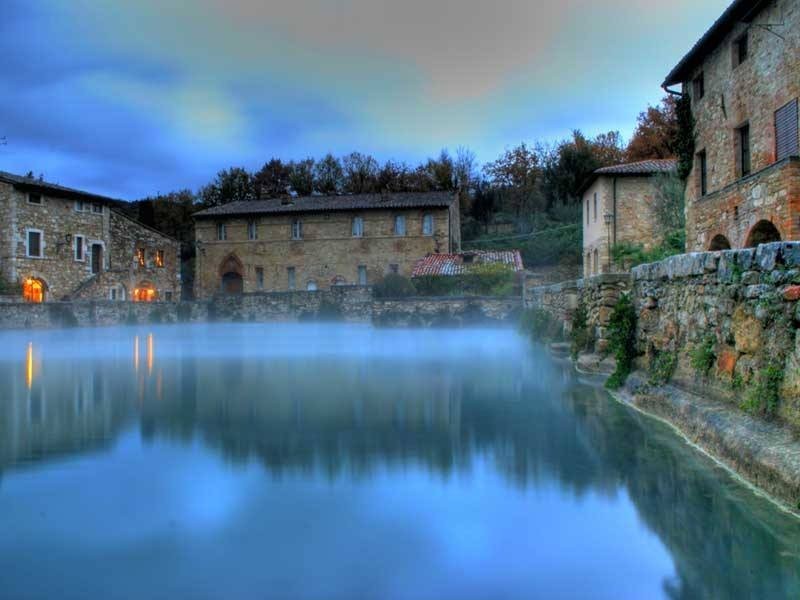 The bike tour from Siena to Rome, will take you through one of the most beautiful places in Italy and in of the world...and not only in our opinion, because in 2004 that place became UNESCO Heritage! This area is also a gourmet's paradise because it's full of culinary products: just think about Brunello di Montepulciano, handmade Pici, Pecorino di Pienza and Cinta Senese cold cuts. The famous white roads, will make you cross this valley surrounded by vineyards, fields, olive groves and cypress trees, all enclose by hills dotted with medieval villages, country houses, churches, castles and monasteries, lying along the route of the ancient Via Francigena. One of these villages is the impressive Bagno Vignoni, a few km from Siena in the municipality of San Quirico d'Orcia, famous for its thermal waters, which even fill the main square! The medieval buildings of the village and the church of St.Giovanni Battista overlook Piazza delle Sorgenti, a huge tub that fills the whole square, leaving free only side corridors for the passage. Here the water gushes at 49°C from the volcanic subsoil, passes through the village and finally falls into a pool where you can swim and relax. The sulphurous waters then continue their run until the the natural park of “Mulini”, where in the Middleage fed four mills carved in the rock and surrounded by the nature.
The village takes its name from the castle of Vignoni, that since 11th century overlooks the town, but the thermal waters were already used by Etruscans and of course were much appreciated by Romans, the people who made the baths a vital necessity, and has built spa from Africa to Syria, from Spain to France. A Roman citizen couldn't give up three things: a walk in the main square, see the shows of gladiators and relax at the spa! A tombstone from Roman times, tells the virtues of these waters, that in the Middleage became famous throughout Europe and many famous people relaxed exactly in Bagno Vignoni: St. Caterina was brought here by his mother in the hope that the worldly life could deter her from the idea of become a nun, while Pope Pio II and Lorenzo de 'Medici were happy to realx from the toils of government and politics. Don't miss the opportunity to rest between the vapors of this paradise, a relaxing experience made even more beautiful by the fatigues of a ride with us in the Val d'Orcia!