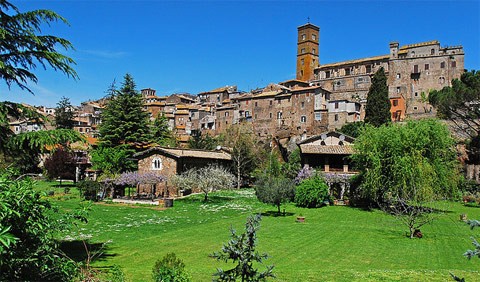 Tuscany Ride a Bike offers a bike tour that will take you from Siena to Rome, two magical cities, through spectacular landscapes and villages rich of history. One of the most picturesque villages of this route is Sutri, built on top of a tuff rock on the ancient Via Cassia, 30 km far from Viterbo.
Its origins are lost in legend ... and no one but two legends! Story tells that has been founded by the mysterious people of Pelasgians, ancient sailors of Aegean sea, while the other legend attributes their origin to god Saturn, have appeared on horseback and holding three ears of corn, as he is painted still today in the emblem of the city.
History tells us that it was a flourishing etruscan village. as still testifies the necropolis that keeps the memory of this era. Later, Sutri was conquered by the Romans to create an empire stretching from Africa to Britain. Throughout the Roman period, the city lived in peace and its citizens could enjoy the gladiatorial games at the wondeful amphitheatre carved into the stone: its remains can still be seen today.
The peace ended with the fall of the Roman Empire and Sutri was involved in the long war between Byzantines and Lombards descended into Italy in 568, until the king of this proud people, Liutprando decided to donate the village to the Pope in 728 b.C. This event may seem not much important but thanks to the famous "Donation of Sutri" has legitimized for the first time the temporal power of the Church. It's not an event of little importance if we consider that even the Vatican is now an independent state! The legends of Sutri are not only about its origin but there is another one about an hero: story tells that in a cave, still visible, would be born on Orlando Paladino, who died heroically defending Charlemagne at Roncesvalles. What was he doing in Sutri? It's said that his mother was Berta, the sister of Charlemagne, expulsion from the royal court because in love with a brave warrior of humble origins who take her away...but she had to stop in Sutri to give birth. The village, in Middleage, was the scene of clashes between Guelphs and Ghibellines, and between two families: Di Vice and Chiesa, until in 1433 b.C the city was sacked and burned by the mercenary captain Niccolò Fortebraccio and gradually lost political importance. Today is a beautiful town and a must stop on our tour from Siena to Rome!!